The Eurofox is not currently available in kit form due to demand for factory built aircraft and lack of an adequate assembly manual.

The Eurofox are factory-built two-seat aircraft manufactured by Aeropro in Slovakia. Aeropro has been producing aircraft since 1990 with now over 600 aircraft now flying around the world. The Eurofox has modern designs with excellent performance and features — built with the finest workmanship and materials resulting in a completed aircraft of the highest quality. The EuroFOX is a real aircraft in every respect. It is joy to fly and own, extremely comfortable with responsive, coordinated controls which immerse the pilot in the pleasure of flight. With class leading visibility, the Euro provides true agility and tremendous satisfaction for the pilot and passenger.

The aircraft is a high wing STOL aircraft with class leading handling, specification, payload and performance that cannot be matched by its direct competitors. Having the widest undercarriage in class, constructed in robust GRP, the aircraft is proven over decades with almost half a million landings. The EuroFOX is a real fun and engaging aircraft capable of operating from the shortest and roughest strips, whilst efficiently cruising at 100 knots.

The fuselage is designed to provide maximum strength, pilot and passenger comfort, and ease of construction. The canopy frame, engine attach points is enveloped in a high-strength, 4130 Chromoly cage — the same steel used to manufacture rifle barrels — providing an additional layer of security and safety.

Wing of rectangular platform with its own aerofoil section is of frame structure with two spar tubes and the system of diagonal struts and system of ribs. Al-alloy tubes of 63 mm diemater are reinforced in the hinges regions by tubes of corresponding diameter. A system of ribs consists of 14 ribs and of 13 aux. ribs supporting the fabric skin in the front wing area. In the horizontal plane the wing is braced by a system of diagonal steel spar tube. The 2×25,5 l fuel tanks are housed in the wing root part. Tanks are welded from Al-alloy sheet. The leading edge shape is guaranteed by a fiberglass part bonded in front of the spar tube. The trailing edge is fitted with an Al-alloy shaped batten. The wing is covered by synthetic fabric POLY FIBER, with applied stretching lacquer and sprayed by a first-rate exterior enamel. flaperons (Junkers flap) are attached through five hinges to the ribs under the wing trailing edge. The flapperon structure consists of Al-alloy tube and laminate sandwich (foam, epoxy resin, glass) formed in a negative mould. Both wings are attached to the fuselage in the upper part through the main tube hinges and in the bottoom part by the hinges of the “V” ‑shaped wing struts. The system of common rear wing hinge and tilt truss axes allows the wing to tilt along the fuselage rear part. This saves a lot of storage place and allows the road transport.

The EuroFOX “wingfold” is just that, wing fold…… one person can open or fold the wings, single handedly in less than 5 minutes, no tricks, no heavy lifting or any extra hands needed. The EuroFOX wingfold was designed from the outset and an integral part of the aircraft, not an afterthought as so many other “wingfold” claims are.

Eurofox 2K taildragger features a composite main landing gear and has wide-spaced main wheels to aid with cross-wind landings and takeoffs, as well as resulting in superior ground handling. As taildraggers go, the forward visibility is very good and with the Eurofox 2K having clear polycarbonate doors the visibility out the side of the aircraft is exceptional.

EuroFOX 3K a fixed tricycle undercarriage with a controllable nose wheel.This wheel is equipped by the tire with dimension 4.00–4 with tube. Main undercarriage carry low-presure tires with the dimensions 15×6.00–6 with tube (or 14×4 /4.00–6/) and are equipped by the hydraulic disk brakes operated from the left and right seat. A parking brake is optional. 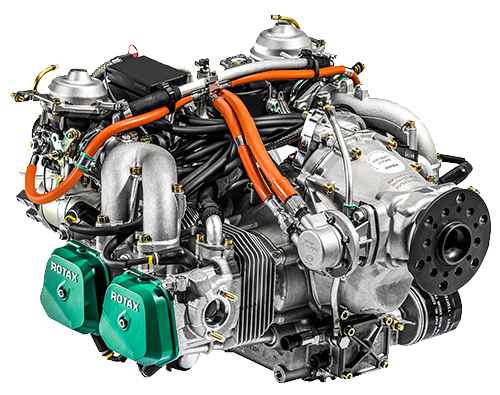 Electric system is formed single-wire system of cabling with ground connection negative pole. Network supplies alternator with rectifier with 250W power and accumulator 12V / 16Ah. Board network is switched by a switch key of switch box. Individual circuits of appliances are switched by separate switches and protected by a safety limit switch.

The aircraft has two upholstered side-by-side. Each is equipped with four-point seatbelt. Luggage compartment with dimension 500 x 300 x 400 mm is situated behind the seats. Is designed for maximum 10 kg. Eurofox has clear polycarbonate gull-wing doors equipped with gas-lift struts and with doors quick-removable (for flying without doors!)

Eurofox has roomy cockpit 112cm — wider than a Cessna 172!  Our instrument panel is special in that it allows the use of almost any large-screen GPS (including the iPad or iPad mini!), while most (virtually all) other S‑LSA planes have instrument panels that have sort of boxed themselves in and don’t have room (at least not in the best spot) for a large-screen GPS and panel has a large map pocket. You can access to the luggage area while flying (many planes have luggage compartments that cannot be accessed while inflight).

Fuel system has a total capacity of 86 l. It consists of two wing tanks (40 l each) and of an 5 l equalizing tank in the fuselage, connected through the pipes with the fuel cock and filter. Fuel level indicators are part of each tank, the minimim fuel warning light is mounted as standard.

Control of the aeroplane

The aeroplane is equipped by dual stick control. Elevator and ailerons are controlled by a system of rods whereas the rudder is cable controlled. The wing flaps are controlled by the lever and rod and through the countershaft is threaded into aileron-flapperon circuit. Trim control is mounted as a standard. All engine controls are placed on the instrument board. Rudder control – pedals of foot control are situated on the floor in front part of cockpit. Moving of pedals is transmitted on the rudder through steel cable. Wing flaps – handle of wing flaps is situated in middle part of cockpit.

Eurofox 2K taildragger features a composite main landing gear and has wide-spaced main wheels to aid with cross-wind landings and takeoffs, as well as resulting in superior ground handling. As taildraggers go, the forward visibility is very good and with the Eurofox 2K having clear polycarbonate doors the visibility out the side of the aircraft is exceptional.

EuroFOX 2K is a taildragger type with controlled tail wheel and are equipped by the premium Beringer dual toe brake system operated from the left and right seat and is available with several tire options.

Back wheel is equipped by the tire with dimension 210×65 mm.

EuroFOX 3K a fixed tricycle undercarriage with a controllable nose wheel.This wheel is equipped by the tire with dimension 4.00–4 with tube. Main undercarriage carry low-presure tires with the dimensions 15×6.00–6 with tube (or 14×4 /4.00–6/) and are equipped by the hydraulic disk brakes operated from the left and right seat. A parking brake is optional. 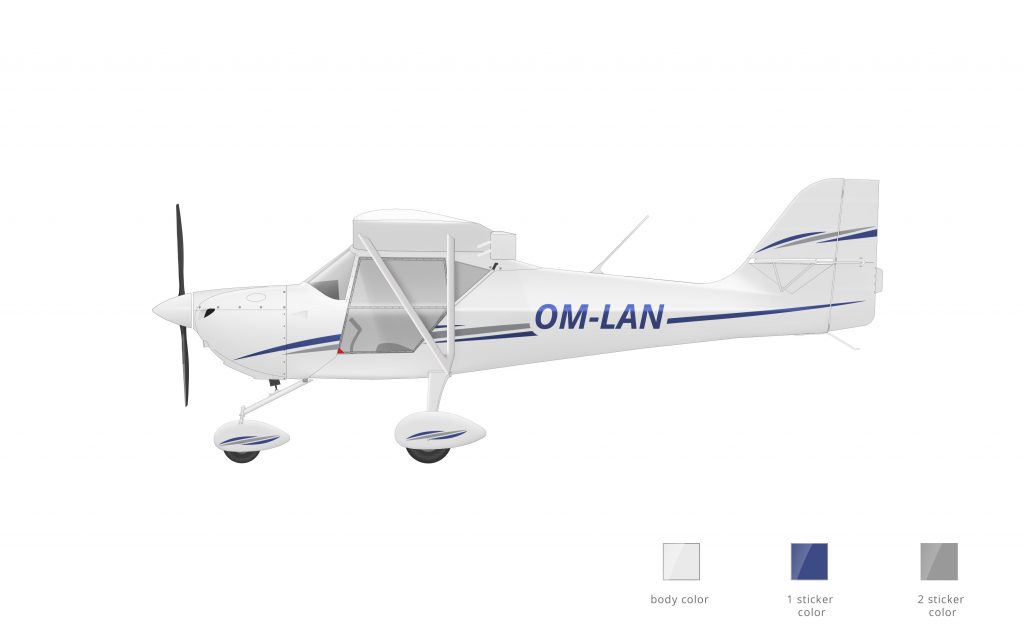 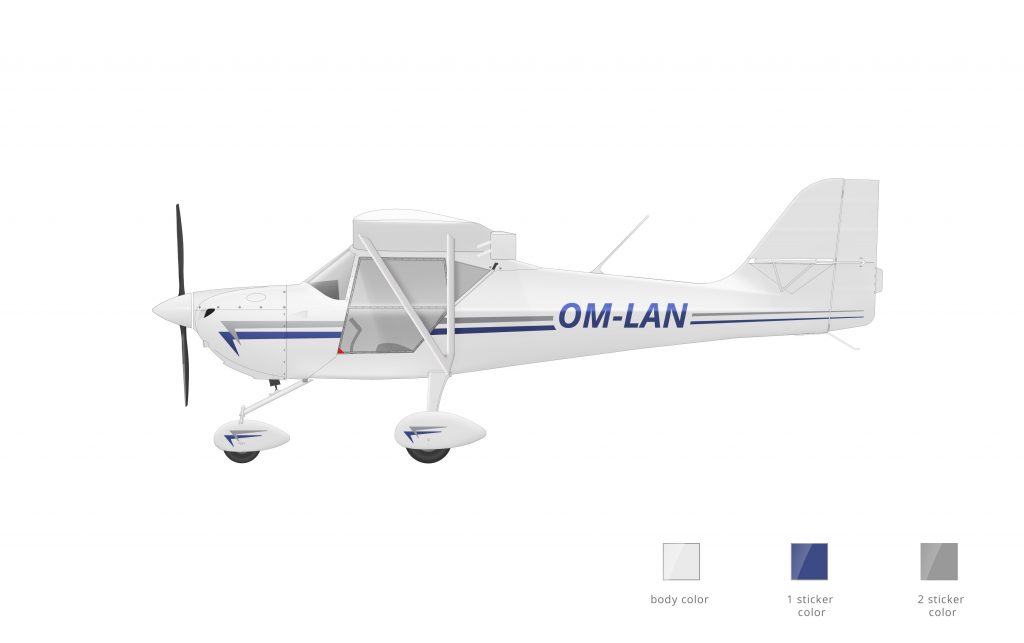 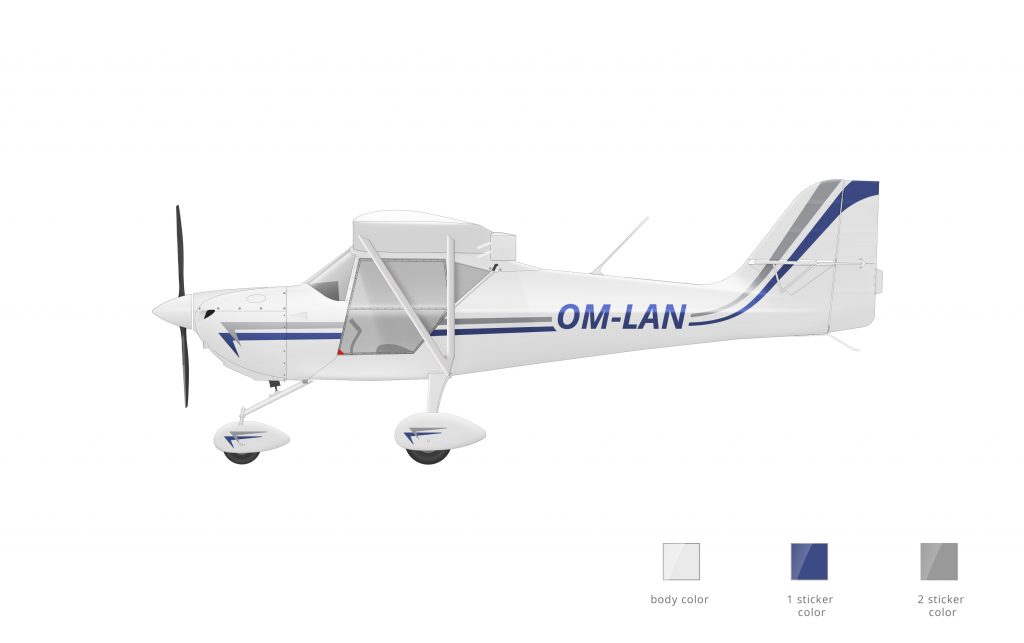 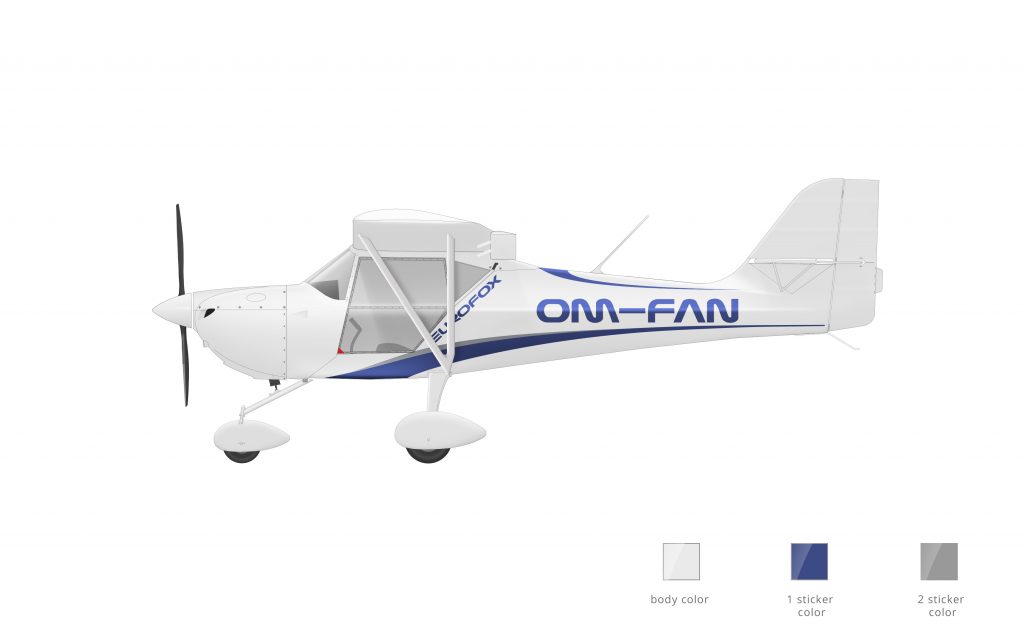 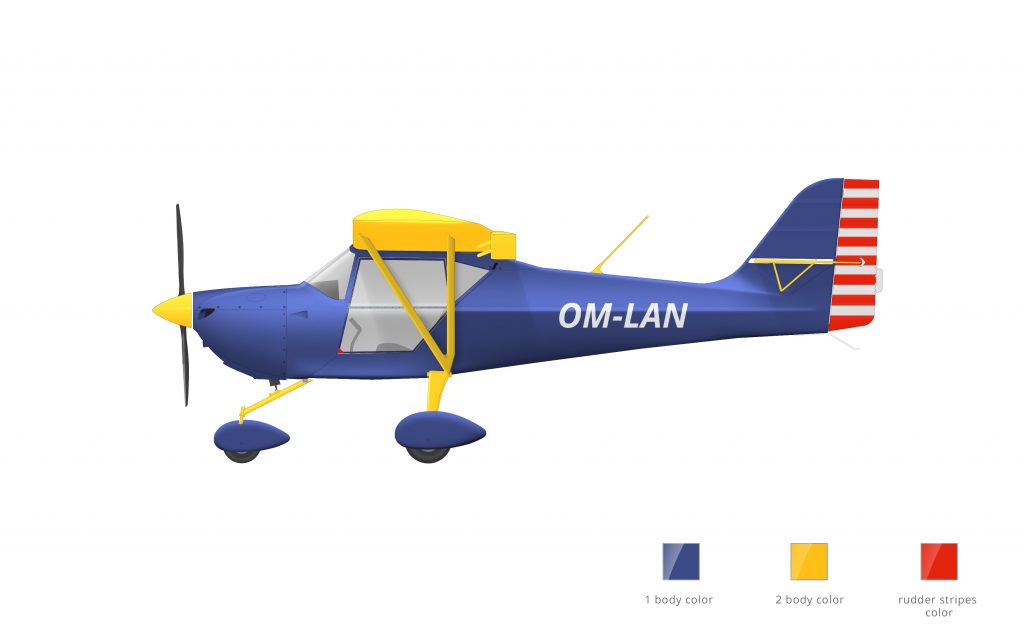 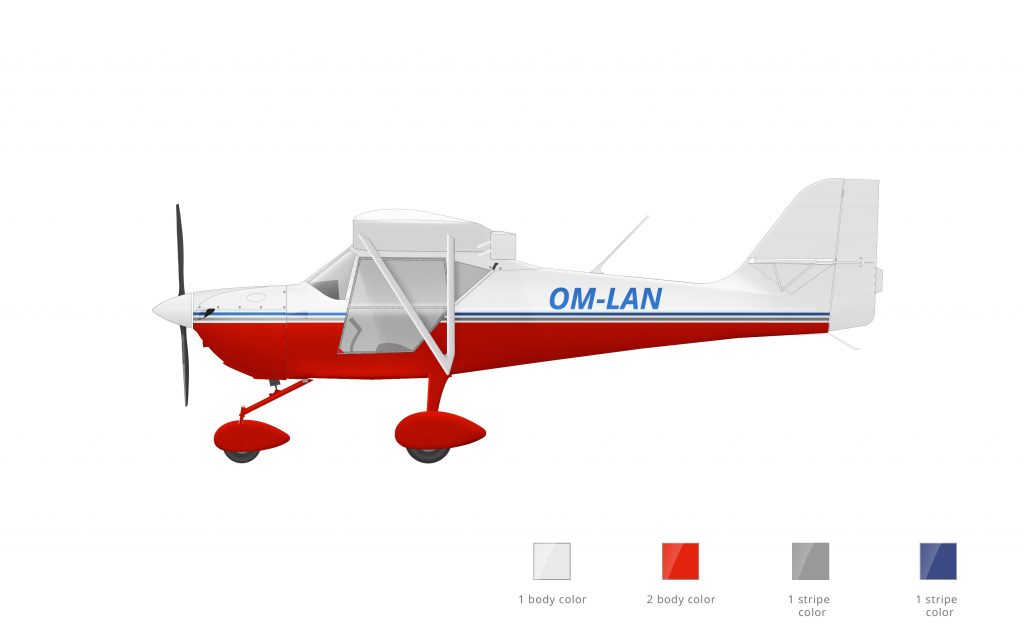 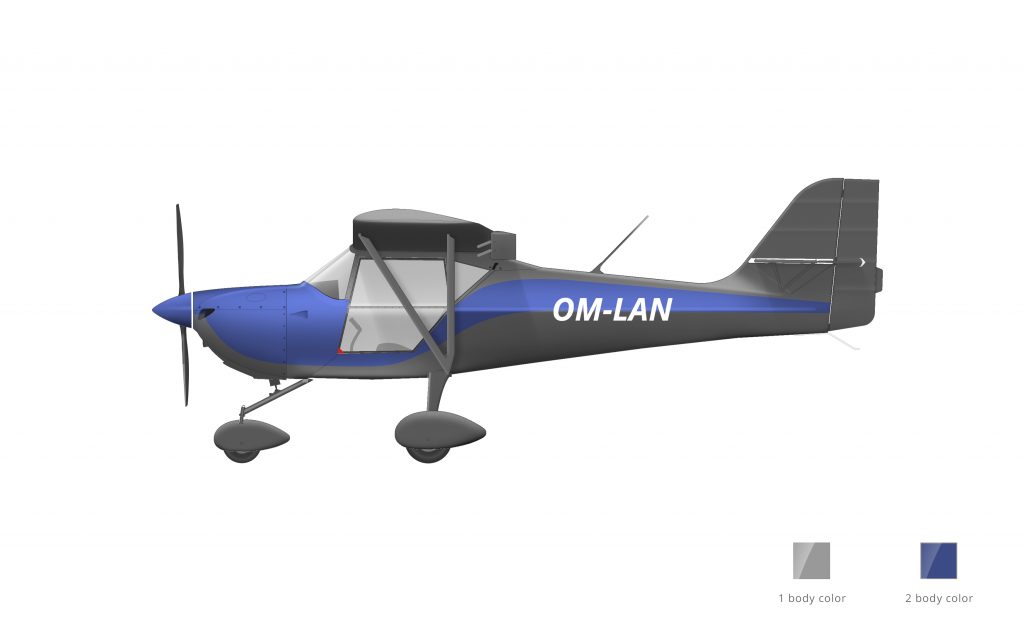 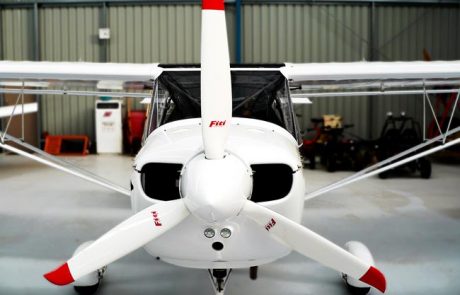 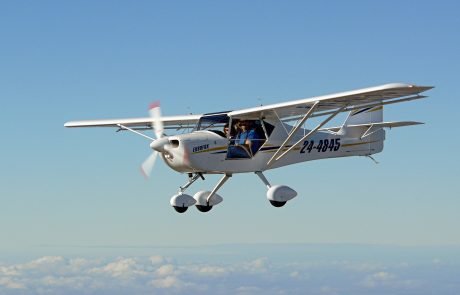 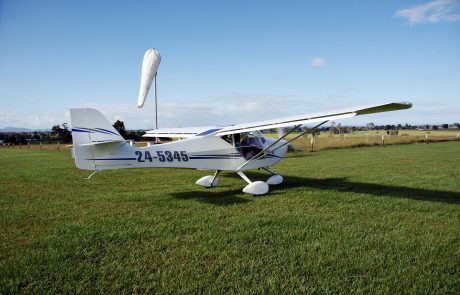 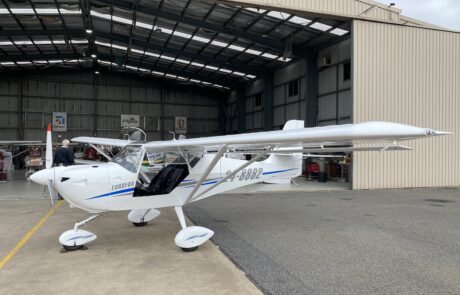 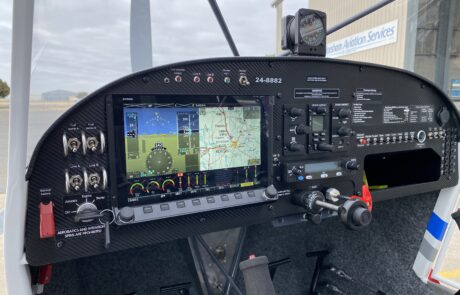 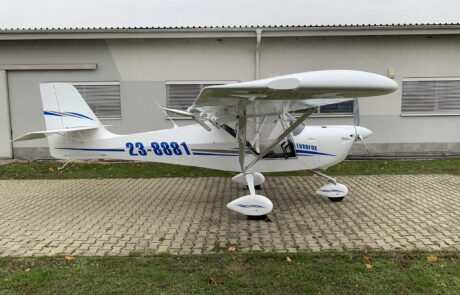 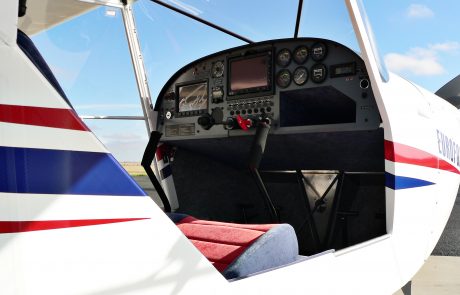 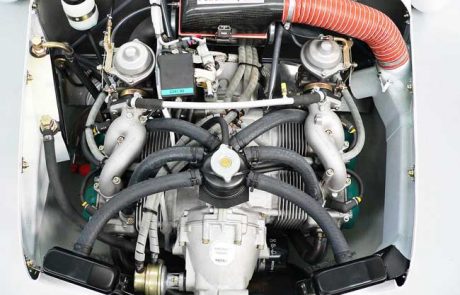 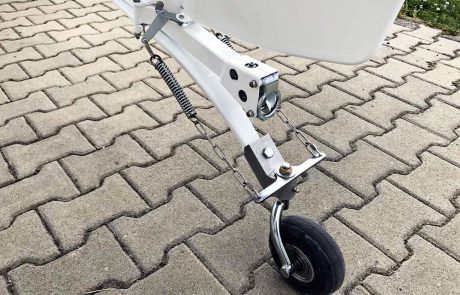 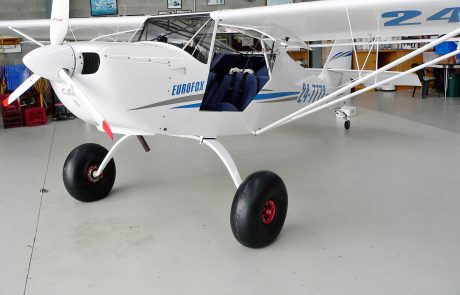 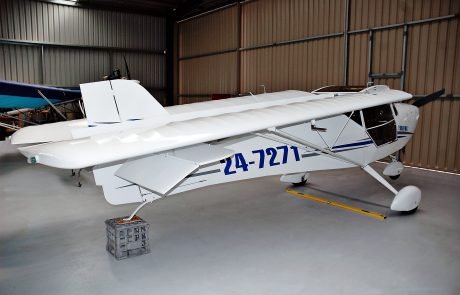 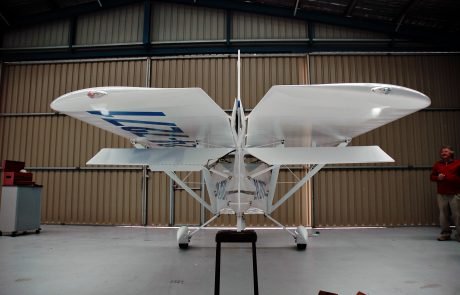 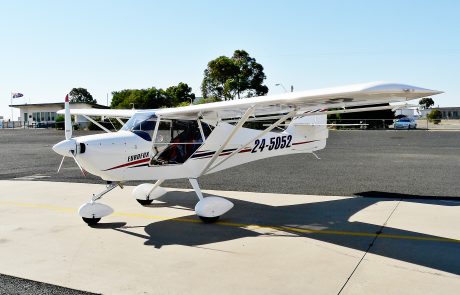