It’s also very important for the ignition timing to be correct. Even a slight advance will increase the CHT’s notably

After 18 years of experience, I realised it was cowl flap control that determined the T.B.O. of the cylinders and the fact that they are not foolproof and in some cases inadequate to provide sufficient cooling to enable engines to reach their T.B.O. without cylinder removal, especially in warmer climates.

If you do not believe me just go to your 182 and close the cowl flaps, then have a look at the total air outlet area. In my opinion and experience it is not anywhere near enough for the two hundred and thirty horse power engine.

From observing other engine installations that have their engines repeatedly run through to T.B.O. without any cylinder problems, we came up with a target operating CHT of 300° F (about mid green on an accurate standard Cessna CHT gauge).

We acknowledge that these engines will certainly run fine with CHT’s all the way up to the 460°F red line but have concluded that any operations with CHT’s above 350°F will come at a cost and that is premature cylinder related problems. We now advise T.C.M. powered 182 owners to give their engines plenty of cooling air using cowl flaps and to try not to exceed our target CHT reading of 300°F (mid green on the standard Cessna CHT gauge with a Bayonet type probe). Note – add 50°F to our noted temperatures if a spark plug type CHT probe is being used. With our target temperatures in mind, we were now starting to see vast improvements in cylinder T.B.O.

As we could not achieve our desired objective, which was to maintain the CHT readings around 300°F + or – 50°F and to make the cooling system fool proof we removed the cowl flaps and fitted fixed shortened type flaps with a trailing edge augmentor strip.

This made the cooling of the engine foolproof and lowered each cylinders CHT reading by 50 to 65°F with a medium amount of cooling drag. 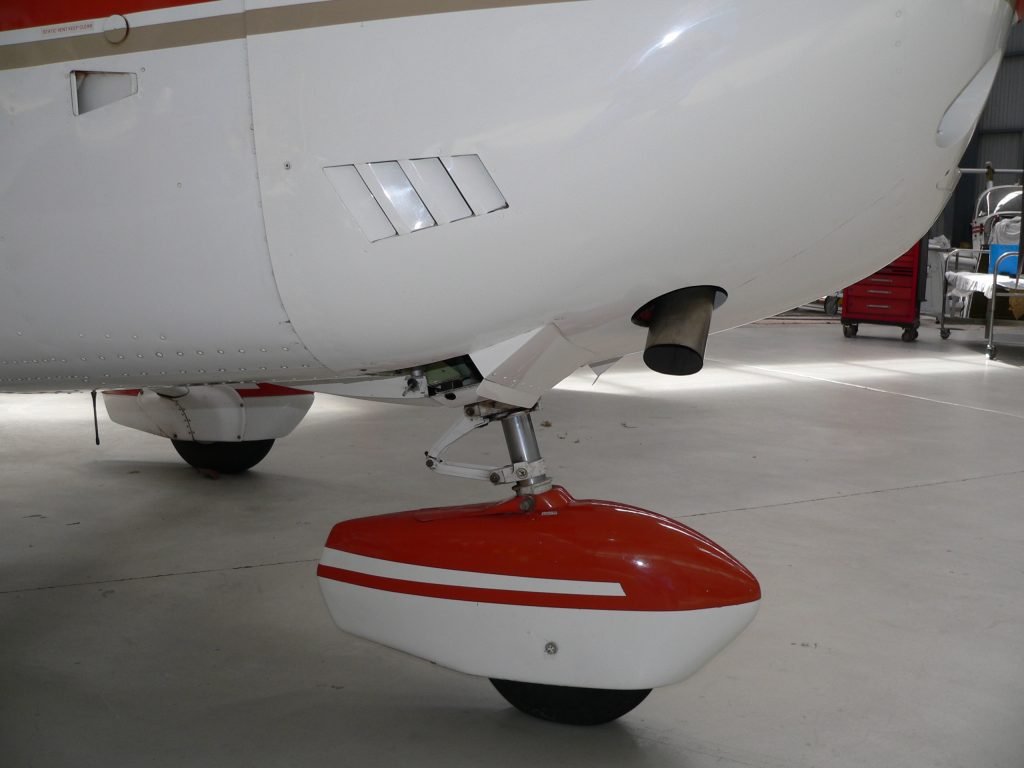 This modification without a doubt has certainly improved cylinder T.B.O. and has reduced the labour involved in engine oil changes and lower engine cowl removal. It is also easily reversible if the aircraft is relocated to an operating area where the ambient operating temperatures are very low (10°C and below).

By products of combustion are water (moisture) and acids which contaminate the engine’s oil and cause corrosion to form on internal components. Corrosion pitts are stress raisers which can cause cracks to develop and in some components such as impulse couplings, notable advanced wear is caused by the iron oxide (rusty) abrasive paste that forms on and wears out the paul pivots. The engine manufacturers have strict corrosion inspection criteria come engine overhaul time. Replacement gears, cam and crank shafts are very expensive and can significantly increase an engine overhaul bill.

Piston ring blow by also causes the oil to dilute by about 8 to 12% after approximately 30 hours of operation. This is why the consumption rate increases toward the 30 hour interval mark. The quality of lubrication also deteriorates in line with the increase in dilution.

If changing the engine oil in an engine can be made easy it is more likely that it will, and can, be done on time and even more regularly such as 4 monthly, 25 or 33 hour intervals.

Instead of reinstalling the oil drain plug you could install our drain valve modification and not have to go through that routine (drain plug removal and reinstallation) procedure again. Our drain hose assemble simply offers up into an installed drain valve and is held there with positive friction. The action of inserting the drain hose assembly opens the valve, which is spring loaded to the closed position. It is even easier to use than the more conventional type drain valves that need to have a hose attached to them first. This modification is a real time saver and promotes added safety and good maintenance practices which certainly assists in getting an engine to its manufacturers published T.B.O.

Continental Induction Drain Filter Mod kit includes filters, S.T.C. and Engineering Order (paper work package). Australian customers $AU250 + $25 Post & Packaging, plus GST. International customers $US250 + $AU50 Post & Packaging. (USD/AUD exchange rate used is the rate advertised by Westpac Bank)
Most of the TCM powered (IO-470, IO-520, TSIO-520 and field retro fitted IO-550 series) engines installed in Cessna single engine aircraft do not have a check valve in the engine induction drain lines to close them off after the engine is started. As a result these open ¼” (diameter) aluminium lines which are connected directly to the induction manifold (one each side) and are positioned to overboard excessive priming fuel at the inboard sides of the cowl flap openings, just forward of the fire wall, enable large amounts of grit/sand/dust or whatever to be sucked up through them into the engines induction system and cylinder assemblies. (Just ask anyone who works on these engines what they find on the inner walls of the induction pipes.)

The ingestion of grit/sand/dust causes notable cylinder and piston ring wear. We have found that installing our in line filters, eliminates the injection of grit/sand/dust through induction drain lines and significantly reduces cylinder and piston ring wear. It also reduces spark plug electrode breeching and is a positive step to assist in obtaining the manufacturer’s published engine T.B.O. and improves engine reliability and safety.